The Department of Labor projects that there will be 1.4 million new information technology jobs by 2020, and there simply may not be enough adequate training programs to prepare Americans for these jobs.

Traditional workforce training programs are stepping up—expanding their IT programs and working with industry to develop curricula that better prepares Americans for today’s jobs. As part of his review of America’s training programs, the Vice President has highlighted innovative new examples of those programs in his report to the President.

The Administration is particularly committed to supporting a new accelerated model of intensive training, often called “coding bootcamps,” which has emerged in several cities around the country. Coding bootcamps teach participants with minimal to no IT backgrounds how to write computer code on an accelerated time frame (usually between 9 and 12 weeks) and regularly result in high paying jobs (frequently around $70,000).

Recognizing the opportunity these accelerated learning programs present to quickly upskill workers, the Vice President has called on local leaders, federal agencies, non-profits, and industry to support more of these non-traditional training models.  Today, in response to that call, Kansas City, Missouri; Louisville, Kentucky; and Minneapolis, Minnesota, together with the Wadhwani Foundation, have worked to create new public-private partnerships, collaborating with local IT employers and city leaders to help drive the expansion of coding bootcamps in their communities.

These efforts build on the Vice President’s announcement yesterday that the Department of Veterans Affairs is taking key steps to support accelerated learning, including allocating $10 million through the VA Center to support coding bootcamps as well as issuing a letter to help existing coding bootcamps and accelerated programs understand how to qualify for funding under the GI Bill. 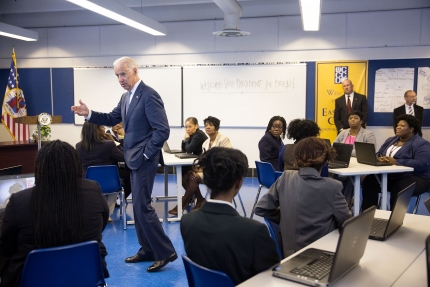 Kansas City: The Kansas City Full Employment Council will draw from a $500,000 grant from the Missouri Division of Workforce Development to provide tuition support for students, and will work through an committed group of Kansas City employers including WireCo, the University of Kansas Hospital, Children’s Mercy Hospital, and Air Charter Team.   ThinkBig Partners has committed to providing free space to a coding bootcamp in their downtown location, which includes a tech incubator, accelerator, and co-working space.

Minneapolis: The Minneapolis Department of Community Planning and Economic Development, working closely with the Minnesota High Tech Association and the CompTia Foundation, will blend state and local funding, together with a $100,000 commitment from the CompTia Foundation, to provide $400,000 of tuition support for city residents to access a coding bootcamp.  Thomson Reuters, along with members of the Minneapolis IT Alliance, will actively engage with a coding bootcamp to help design demand-driven training, with a variety of locations available for a bootcamp.

Louisville: The Metro Louisville Mayor’s Office for Civic Innovation and KentuckianaWorks will build on a newly launched collaboration, Code Louisville, working with leading employers in the Louisville area to expand opportunities for Louisvillians to obtain accelerated IT skills through coding bootcamp.   KentuckianaWorks has $400,000 in Workforce Investment Act funding to provide tuition support and space will be available to a coding bootcamp in an emerging new innovation hub area in downtown Louisville, which is anchored by the Nucleus Innovation Park, started by the University of Louisville Foundation.

Ensuring Transparency: The Wadhwani Foundation will provide support to document and evaluate the models undertaken by Louisville, Kansas City, and Minneapolis as they move forward, so that other cities can learn from the work being pioneered and identify opportunities to improve and expand on the approach.

In addition to these efforts, under the leadership of Vice President Biden, the Administration has implemented key executive actions to make federal employment and training programs and policies more effective and responsive to employer needs.  By supporting skills training such as IT boot camps, these efforts can help further economic growth across the country.