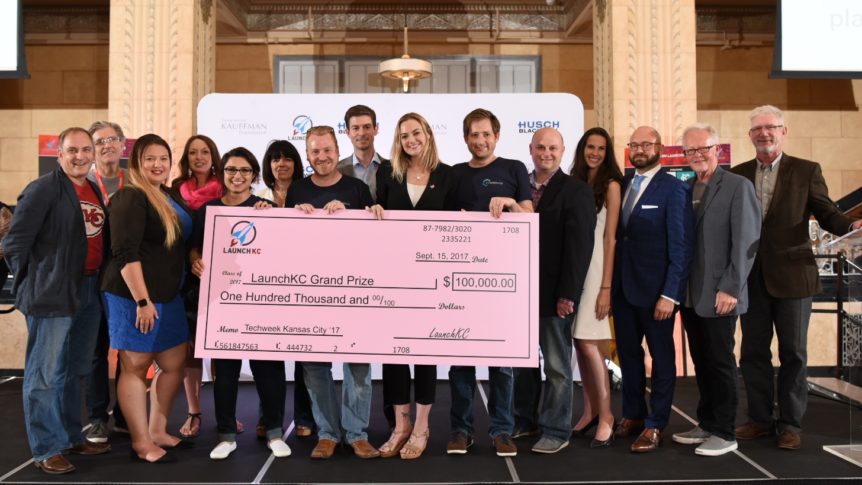 Another outstanding LaunchKC competition came to a close Friday, September 15, when nine amazing tech startups were awarded $500,000 in grants. LaunchKC is a months-long competition aimed at attracting and keeping tech entrepreneurs in Kansas City.

The nine winners – eight from the KC metro and one from Colorado – were chosen from the 20 finalists announced back in August. Each of the finalists pitched their business to 22 LaunchKC judges in front of an enthusiastic crowd of about 100 at the Power & Light District over a four-hour period. After a long day of deliberation, the nine winners were announced that evening.

For the first time in LaunchKC history, a grand prize of $100,000 was awarded. Cambrian Tech, from Leawood, took home this prestigious honor – and the big infusion of cash (in the form of a grant). Cambrian created an augmented reality app called Home Harmony that allows home improvement DIY’ers to visualize projects like flooring and countertops before they invest in doing the work.

“This grant means so much to Cambrian,” said Heather Spalding, co-founder and COO. “With this money we will be able to immediately hire one or two new developers, which will free us up enough to raise capital to continue to fund our growth. We are so grateful for this opportunity to strengthen and scale our business and couldn’t be happier to be in KCMO.”

You can read about the eight remaining winners, who were awarded $50,000 each, on the LKC website.

Winners get more than just cash grants. They get 12 months of free office space in Downtown Kansas City; industry-specific mentor teams for each company; and opportunities to meet and learn from industry and entrepreneurial leaders in and around Kansas City. We want to do everything we can to help the winners build high-growth, tech companies and jobs here in our city.

Friday’s announcement follows weeks of application reviews and scoring by a panel of more than 35 business and financial leaders. These volunteers had no easy job – picking 20 finalists out of a pool of 400 applicants from 19 states and five countries. And this year’s applicants were better than ever.

We congratulate the nine winners and all of the 20 finalists, who were all strong contenders for LaunchKC’s grants and will surely go on to build strong, economically successful businesses.

LaunchKC is an initiative of the Downtown Council of Kansas City, in collaboration with the Economic Development Corporation of Kansas City.

The program is fueled each year by the visionary support of corporate, public and philanthropic partners. For 2017, the sponsor honor roll includes: