If you grew up anywhere in the Kansas City area, chances are good that a member of your family has dined at Jess & Jim’s Steakhouse in Martin City (South Kansas City, Missouri). Yahoo! recently named the restaurant one of the 10 best steakhouses in the world, calling it “the old-school kind of joint your grandfather may have enjoyed.” Actually, your great-grandfather may have been there too.

While the restaurant may now be famous, the 115-year-old building itself has been an icon in Kansas City for many years. In 1938, Jess Kincaid and Jim Wright originally opened the restaurant at the corner of 135th and Holmes at the location now occupied by Jack Stack Barbecue. A tornado destroyed the building in 1957, forcing Jess and Jim to move their restaurant just down the street to the current location. Jess & Jim’s Steakhouse has been preparing award-winning steaks ever since. 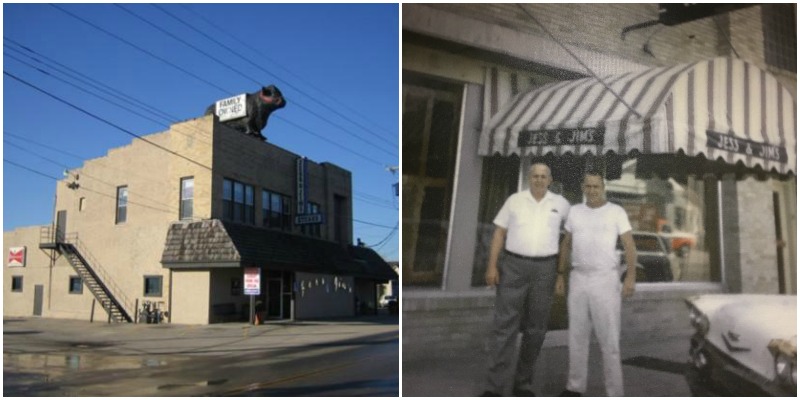 According to owner Mike Van Noy, the current building was constructed in 1901 and was once almost demolished. The building was actually a roller skating rink before the restaurant moved in.

Mike knows a thing or two about the building’s history. After all, he started working there 40 years ago as a dishwasher when his father owned the restaurant. Mike took over ownership in 1990, with his wife, Debbie, who manages the restaurant. Their three children also play integral roles in daily operations.“It is home for our entire family,” says Van Noy. “We have a house that we sleep in, but the restaurant is really our home.”

The building is the tallest structure in Martin City and has many well-known features, such as the iconic cow on the roof and a growing customer wall-of-fame. 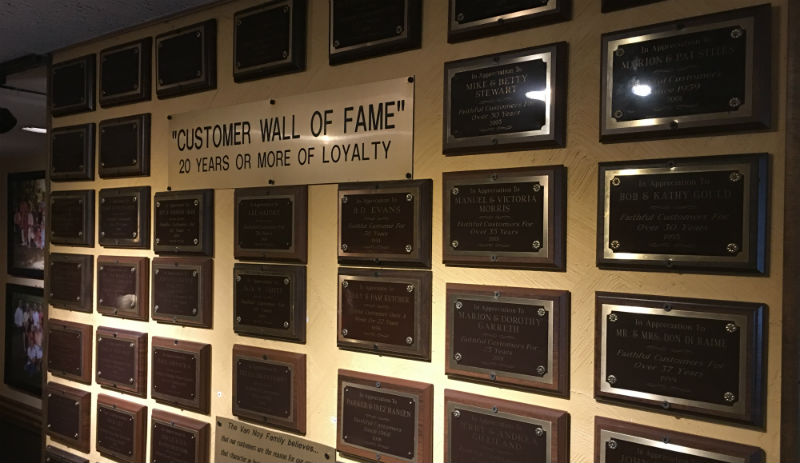 While Jess & Jim’s has continued to grow, their building has continued to age. In the 1970s, the front of the building was blocked off with a breezeway which prohibited people from seeing in from the outside (or seeing out from the inside!) Two years ago, Van Noy removed the breezeway, installed new windows and added a fire pit to the patio to open things up for people.

“Our customers tell us they really like the changes,” says Van Noy. “They love to sit on the patio and watch the trains go by. The tracks are so close to the patio, you can feel the entire building shake as they pass by!” 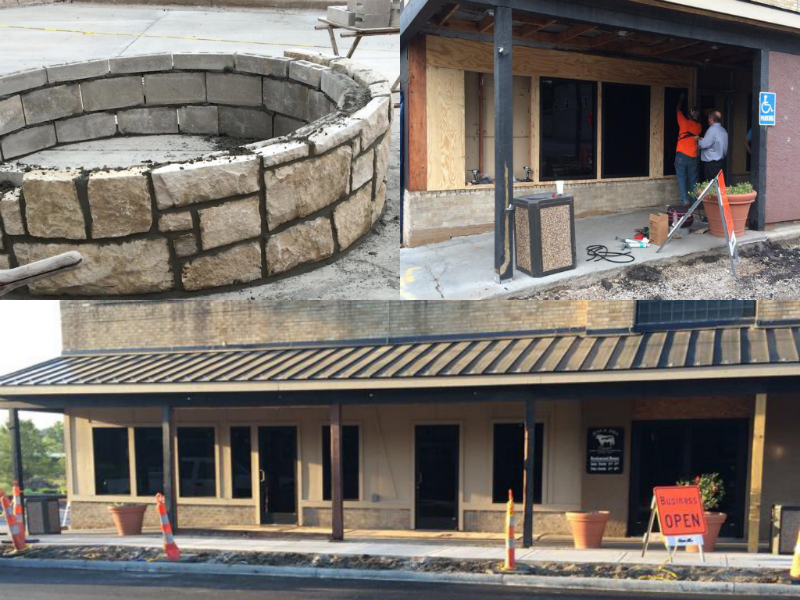 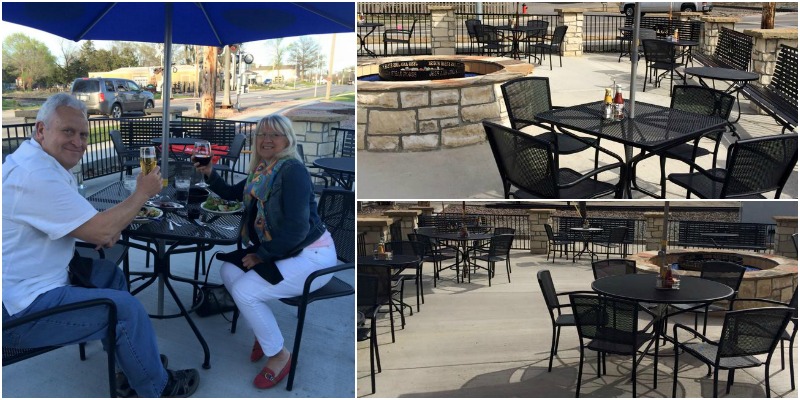 Many of the updates were inspired by the work of the Martin City Community Improvement District (CID). CID’s are created when a business area wishes to improve conditions for existing businesses and attract growth. Safety, cleanliness, beautification, business retention, business growth, capital improvements are all issues that drive CID’s. Because of all the efforts of the Martin City CID, they were selected as 2016 Cornerstone Award finalist. 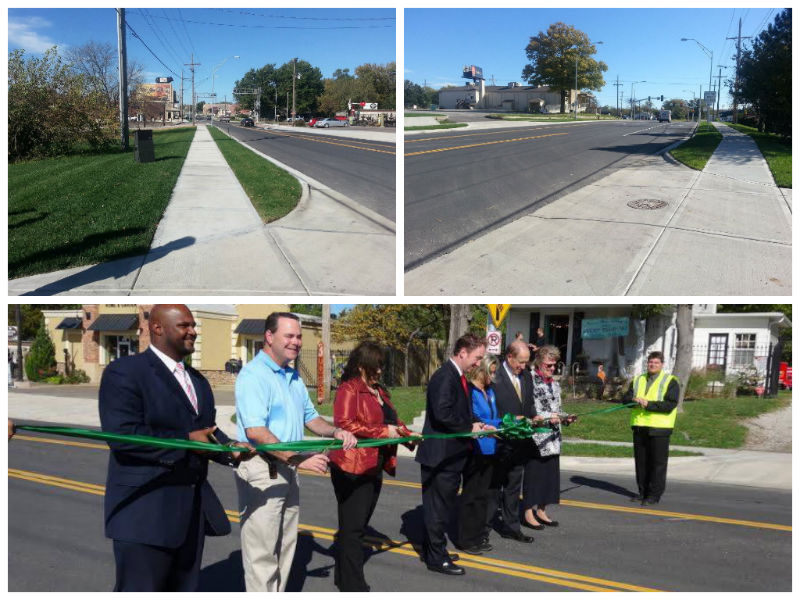 “With all the new construction going on in Martin City, we thought it was about time for us to fix some things up around here,” says Mike Van Noy. “We really needed to give ourselves a facelift.”

While improvements have been underway over the last year to the front of the building, Debbie Van Noy says they are far from finished. “Opening up the breezeway on the main floor was just the start. We are about to blow out the wall upstairs and all the front facing windows on the second floor to brighten up our event space.” She says they’d also like to figure out a way to wire a button that links to the cow on the roof so customers can make him moo!

Mike Van Noy says that while they are always looking for ways to improve the building, their main focus is to keep doing what has made the business successful for nearly 80 years. “Our customers are loyal. We have had five generations of family members eat, and now make a living at the restaurant. It is truly a family business.” He says whenever he thinks about changing something, he remembers his father’s advice….”If it ain’t broke, don’t fix it,” says Van Noy. 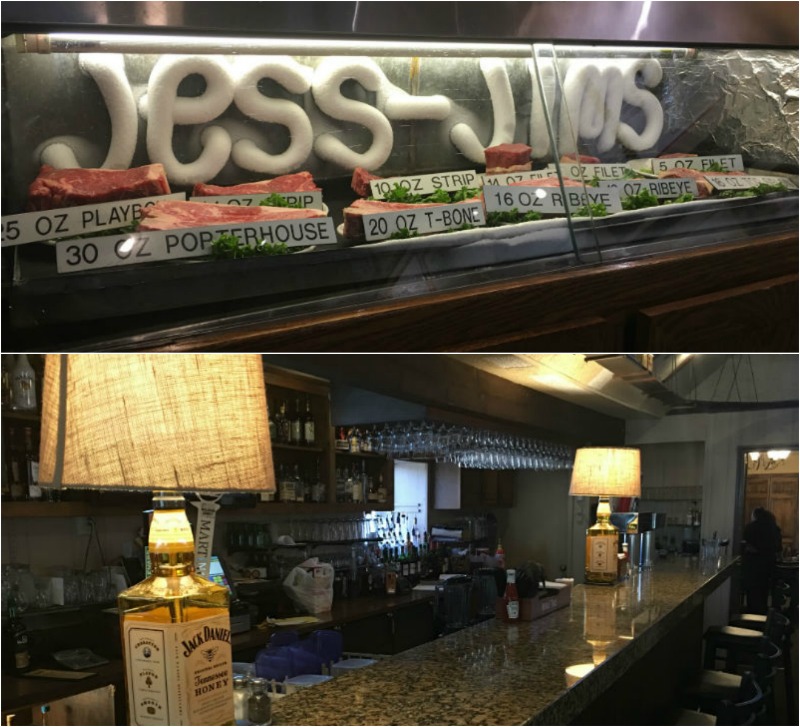 Many people have asked why Jess & Jim’s Steakhouse has remained in Martin City for all these years when many in the restaurant industry have focused on more popular areas in the region. Van Noy says Martin City is a special place and they would never consider moving the restaurant.

He points out that Martin City is just across the Stateline from the wealthiest Johnson County suburb of Leawood, Kansas and also caters to 2500+ employees at Honeywell FMT – just 5 minutes away. “We also have dedicated local leadership and business owners who will lobby together to make things better, and that makes a big difference in what we can accomplish as a community,” says Van Noy. “This whole town is our lifeline,” he added. “We respect the entire community and everyone helps each other. It is a great place to have a business and we’ll be here as long as Martin City is here!”