The results are in, and the people have spoken. The Martin City Community Improvement District (CID) is the 2016 winner of our inaugural People’s Choice award! The 2016 EDC Cornerstone Awards kicked off Wednesday evening (5/11) at Union Station with Masters of Ceremonies – Mayor Sly James, EDC President Bob Langenkamp, Bridgette Williams – EDC Board Chair and Deputy Director of the Heavy Constructors Association of Greater KC, and Rosana Privitera Biondo – EDC Marketing Committee Chair and President of Mark One Electric, introducing the winners. Over 400 alumni finalists, city officials, and key business leaders were in attendance, giving attendees an opportunity to meet and greet many of the people responsible for economic growth in Kansas City, Missouri. 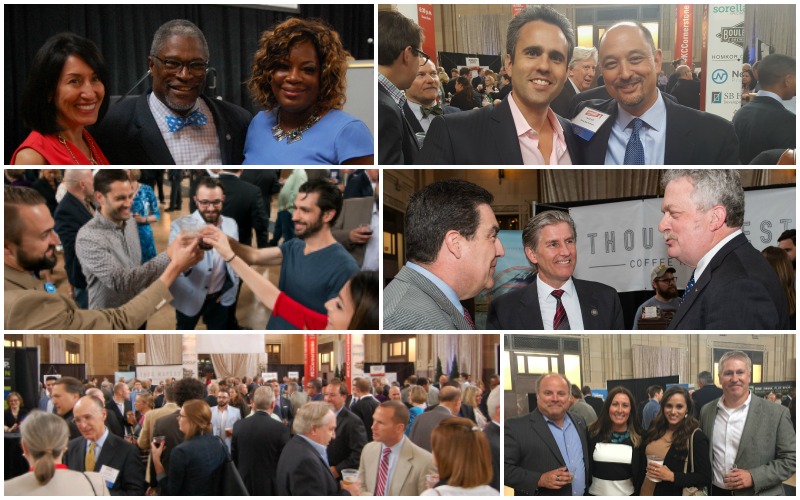 The Cornerstone Awards celebrate businesses in Kansas City, MO who have made the most impact in terms of economic growth within KCMO city limits through new construction, redevelopment, capital investments, and/or jobs created. The EDC partnered with LiveKC to evolve this year’s Cornerstone Awards to a more interactive experience with food stations from some of Kansas City’s most popular independent restaurants and businesses.

LiveKC is a group on a mission to make Kansas City an attractive place for  young people to live, work and play. They act as a cultural change agent on a civic level by hosting and co-hosting events all over the City. LiveKC acts as ambassadors, telling the world about employment opportunities and the cultural living environment we have here in Kansas City. 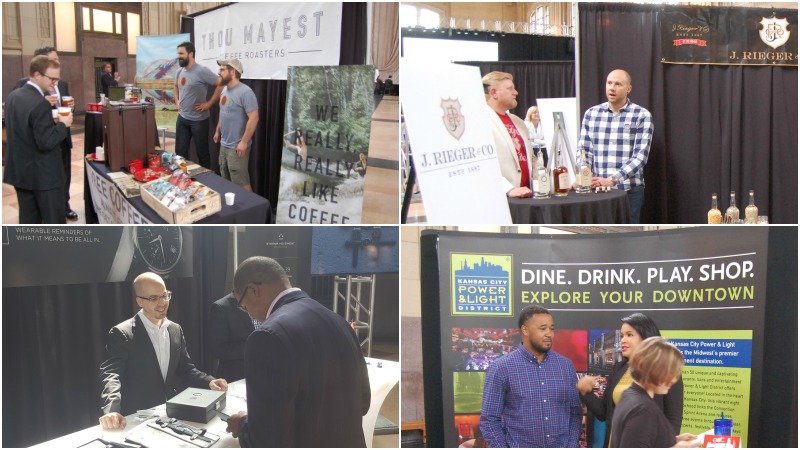 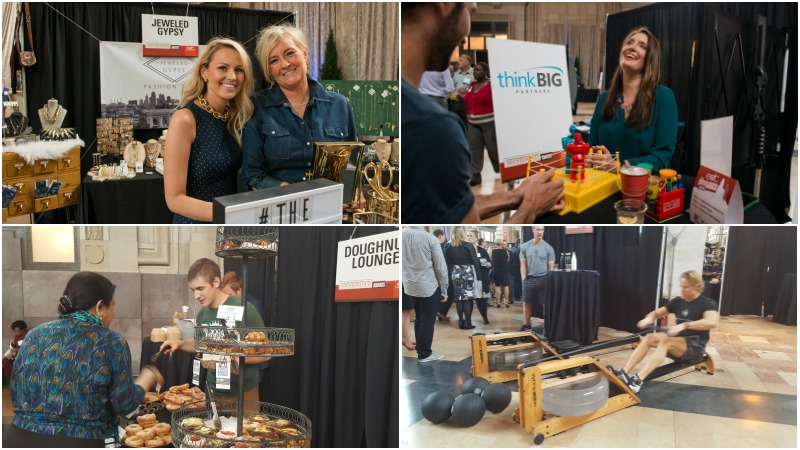 Mayor Sly James kicked off the 2016 Cornerstone awards event by asking the crowd, “How many people rode the streetcar to get here tonight? Wasn’t it a great ride?” At least a quarter of the audience raised their hands. “That’s just one of the incredible projects that defined our great City this past year and we’re going to celebrate more of these projects throughout the evening,” said James. He went on to say if you “celebrate” too much, “don’t forget, you can always take the streetcar back where you started!” Tweeters were chatting about it online throughout the evening. 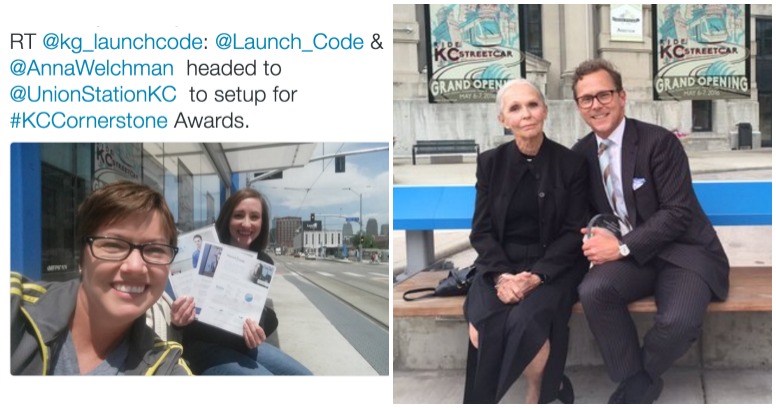 A big highlight of the event was when Mayor James presented Ollie Gates, owner of Gates Bar-B-Q, with a 2016 EDC Lifetime Achievement Award. Gates Bar-B-Q enjoys a 70-year history and is a Kansas City original. Ollie Gates has grown his restaurant empire from a single storefront at 19th and Vine to a family of restaurants throughout Kansas City, all with the Gates unique red roof design and the man in a tuxedo top hat. And, of course, the best greeting of all time. Hi, may I help you? 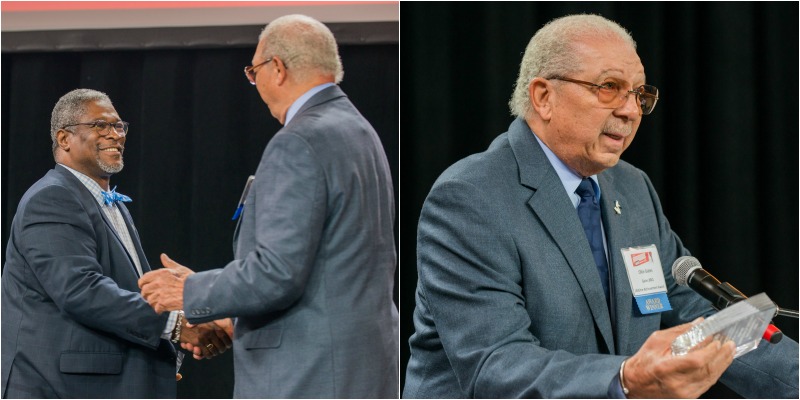 Aside from his incredible reputation in barbecue, Ollie has a long history of investments in Kansas City. His projects, both commercial and residential, along 12th Street and the Prospect intersection, his work on the historic Paseo YMCA, and his redevelopments along Cleaver Boulevard between Troost and the Paseo are all significant. Ollie also served the City with distinction as the Chair of the Board of Parks & Recreation Commissioners and has worked relentlessly to change the economic landscape of the urban core. We were honored to present the 2016 EDC Lifetime Achievement Award to Mr. Gates for his tireless dedication to Kansas City.

The Vice Chairman of the Board and co-founder of Cerner as well as one of the owners of Sporting KC, Cliff Illig, was, unfortunately, unable to attend the event in person but met ahead of time with Board Chair, Bridgette Williams, to talk about what makes Kansas City great. A few of his comments were shared at the event on video. 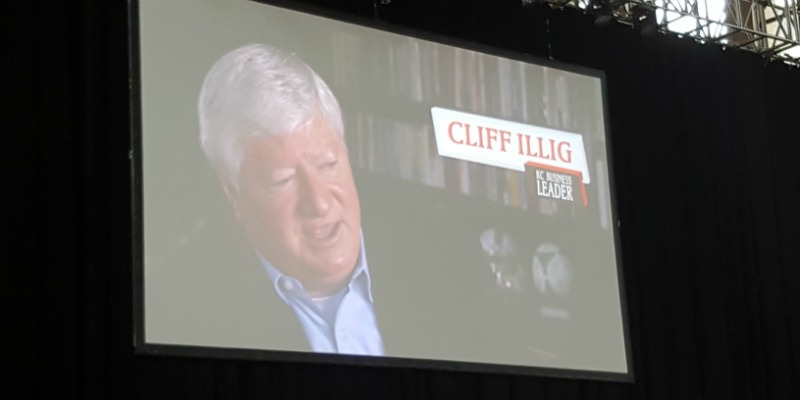 Illig said one of Kansas City’s big challenges is in trying to get millennials to want to be here in the Midwest. “We don’t have the mountains or the ocean like the coasts but we can still create opportunities with the resources we do have right here in the middle.” He said Kansas City needs to support our entrepreneurs by getting barriers out of their way. Even from a video, the words of inspiration from one of Kansas City’s business legends could be felt throughout the room.

EDC Board members, Bridgette Williams, and Rosana Privitera Biondo, were then introduced and took the state to introduce the ten Cornerstone winners from the pool of 2016 Cornerstone finalists. 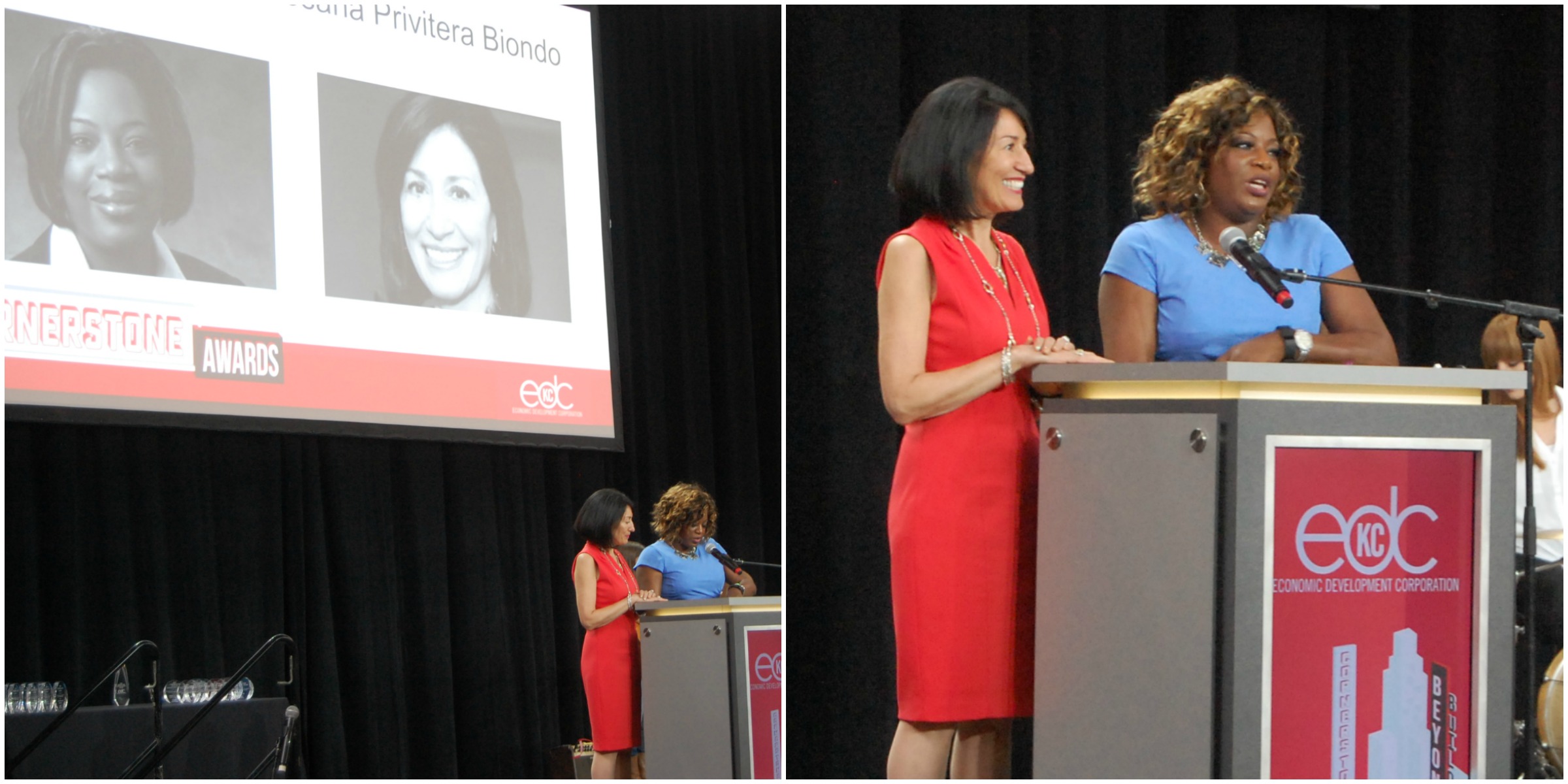 Congratulations to all the 2016 Cornerstone Winners! 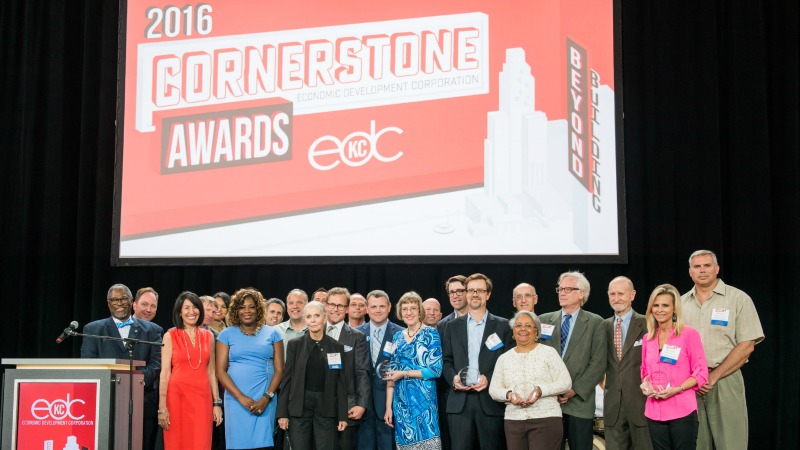 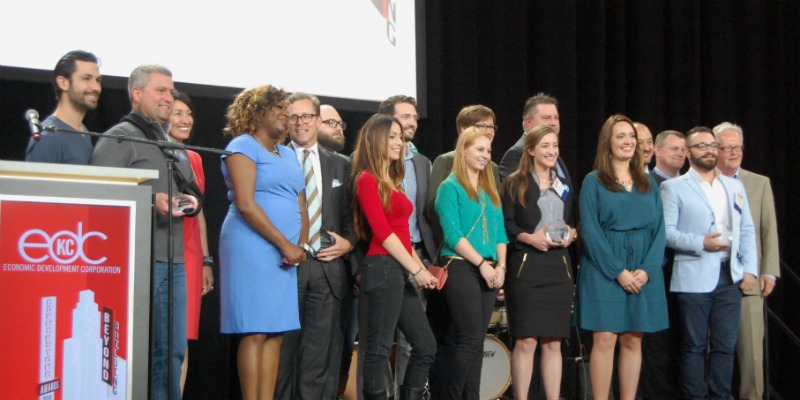 “Made In KC” Award Winners 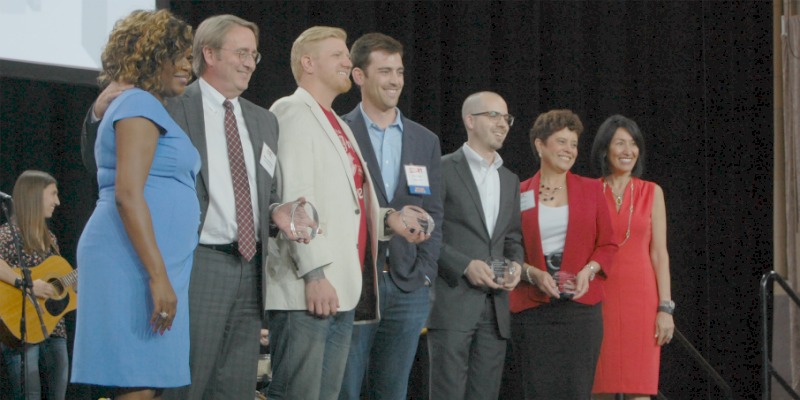 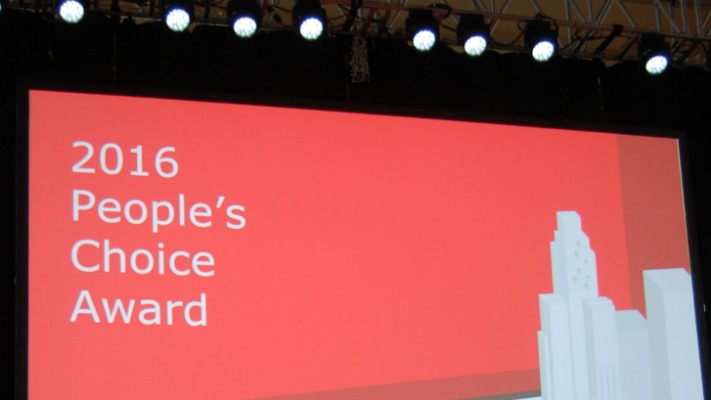 Just under 1000 people voted in a ten day public Facebook contest to determine the “People’s Choice” winner, where the Martin City CID captured more than 42% of the vote. The Martin City CID is a 300+ acre Community Improvement District in South Kansas City with 75+ businesses that generated over $50M in sales tax revenue for the city of Kansas City, MO in 2015. According to Missy Wilson, the Executive Director of the Martin City CID, this award is the result of countless business owners and community members who banded together to improve the district. 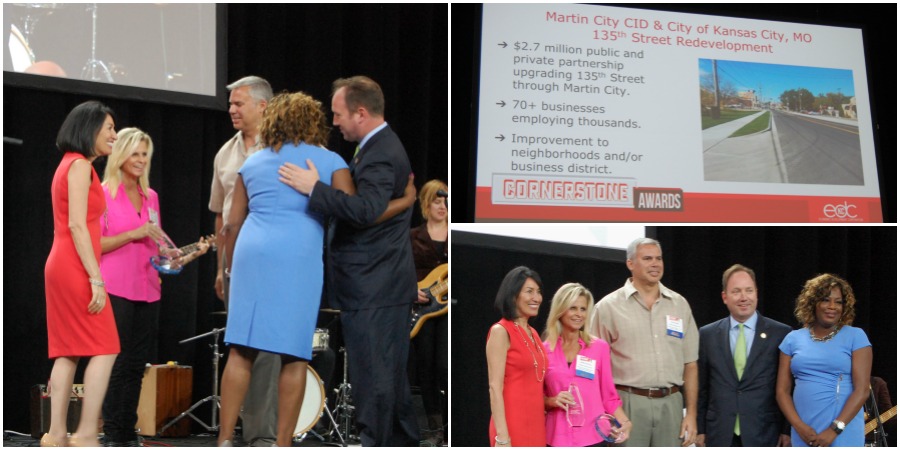 “Martin City is often forgotten because we are so far south and removed from the excitement of downtown Kansas City, MO,” says Wilson. “We are still very much a part of the City of Kansas City, Missouri, and the business owners in the Martin City CID have relentlessly remained focused on improving the district, no matter how many obstacles have come up.” For ten days, the entire Martin City community rallied up Cornerstone votes through phone calls, email, social media, and local restaurants placing cards in customers’ checks asking them to vote for Martin City. “It’s a testament to how well the CID is willing to work together to support a common cause,” says Wilson.

It’s exciting to see the incredible amount of investment and contribution all the finalists and winners of the 2016 Cornerstone Awards have made in our city. We’ll be following their progress throughout the coming years because we know they will continue to grow! Of course, we would not be able to present Cornerstone awards without the tireless work of others. A big “Thank You!” goes out to our 2016 Cornerstone sponsors! 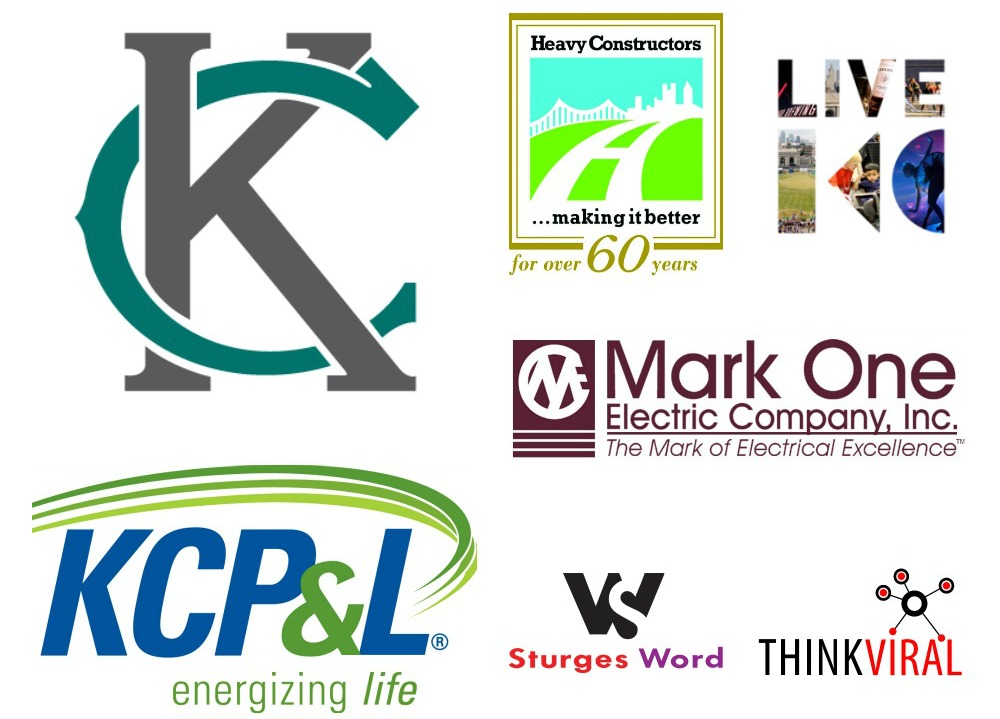 Special thanks to Evenergy Events & Sponsorships and Harvest Productions for working with the EDC to plan and produce the Cornerstone Awards event, to Union Station for hosting the event, to ThinkViral, who managed the Facebook contest for the People’s Choice Award and live-tweeted the event, and to the all-female musical group, Katy Guillen and The Girls, for the outstanding live music performance!

We look forward to seeing you at next year’s Cornerstone Awards event to honor new people, organizations, and projects currently in the works!