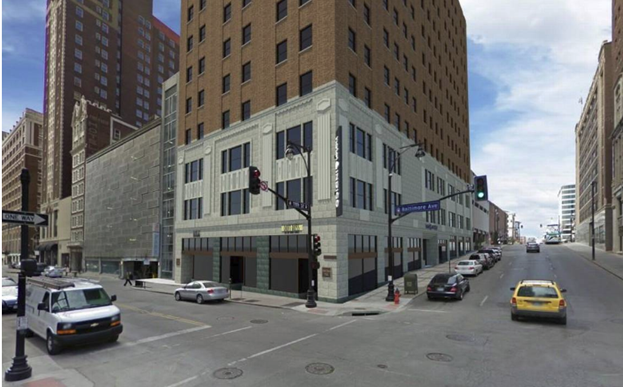 Vacant and deteriorating for more than a decade, the historic Brookfield Building at 101 W. 11th St. in Kansas City recently opened as Kansas City’s first and the nation’s 50th Hotel Indigo.

The building originally opened in 1930 as the Fairfax Building. In 2004, a co-developer of The View condominium project in Kansas City bought the Brookfield Building. Largely vacant at the time, a fire and a flood drove the remaining tenants away, leaving behind the rapidly declining building.

In 2012, the building made the city’s dangerous building list, and when pieces of pieces of terra cotta fell from the upper floors, officials were forced to barricade sidewalks in the area.

Redevelopment of the historic Brookfield Building in downtown Kansas City transformed a dilapidated downtown property into a modern, high-efficiency mixed-use building, including Hotel Indigo and Fairfax Loft Apartments, while restoring it to its historic grandeur. The principals of Kothe Real Estate Partners, Great Lakes Management Group, and KP Property Development formed a partnership, Brookfield Hotel Investment LLC, to redevelop the historic Brookfield Building.  “We are very pleased that with assistance from the EDC, we were able to take a dangerous building and make it into a beautiful hotel and apartment loft space,” said Kevin Page of KP Property Development LLC.

The hotel features modern accents, such as leather headboards and barn doors. The design theme of the hotel, transportation, serves as a nod to the building’s past as the Santa Fe Railroad ticketing office and administrative offices of the Fairfax Municipal Airport in Kansas City, Kan. Travel related postcard and postmark murals adorn the walls, while the bar in the hotel’s restaurant resembles the old Santa Fe ticketing counter.